Do You have The Blues?

Posted on September 8, 2016 by litbandit

One of the things I am most proud of is a comic called “The Blues” illustrated by the extremely talented Silent James.
The story that is the basis of so many blues songs – the devil, the crossroads, that deep down soulful music.
The comic is finally available for you to hold in your hands. Whether in paperback or on your e-Reader.
Have a look and let us know what you think!

You can find the comic on Amazon right HERE!

Okay, I realized asking you to scroll through the entire blog looking for art wasn’t the nicest thing to do.
So here’s a list of everything that’s up for sale, with the links so you can see the picture.
The majority of these are black and white, remember that, and all are $10 each.

1. Deathface Ginny from Pretty Deadly This one is from a moleskine notebook.

34. Wonder Woman – Love does not belong in War

Everything must go!!
Every drawing that is posted here can be yours for lets say…$10, no shipping (unless you’re over seas).
Everything is available except for the Wonder Woman’s Boyfriend pages.
If you don’t find anything you want, I’ll do an original commission for you for $15 black and white, $25 full color. All pages are about 10×13, give or take.

Transactions will be done through Paypal.
Just tell me the one(s) you’d like and I’ll email you the Paypal request for funds the same day I the art out, which will more than likely be on Saturdays.

Any help would be great, and come on…who doesn’t like art? Right? Have a look and tell your friends!

Just leave a comment below, or on the piece that you want, or email me at lriley17 (at) hotmail (dot) com.

I’ve started a new blog. Stories that all run on a central theme. It will be it’s own beast. Journalistic dispatches from a world of the strange.

It’s here, if you’d care to have a look. I, for one, am enjoying the writing, so I hope you enjoy the reading.

O’Death: Out of Hands We Go

There are some bands, once I discover them, I sink my teeth in and never let go.
It was around this time about two years ago. The leaves were yellow, the sun was working part time and it was dark earlier than usual. It might have been snowing a little.
I had just bought a book. A great Southern, gothic noir novel by Denis Johnson.
In other words, it was like the universe was pointing me towards O’Death.

Their new album just came out earlier this month. It’s great, fantastic, perfect…I could go on and on saying the same thing over and over.

I will tell you this. These guys are serious musicians. With each album they become tighter, more cohesive. They retain the rawness I fell in love with.
Those barren landscape vocals and pleasantly grating sounds are still there, unmistakable O’Death.
But they are growing, strengthening their sound, building upon a sound I’ve heard nowhere else.

They are the perfect October band. The band to listen to as the trees blacken, the nights grow chilly, the ghosts creep about.

O’Death fills me with the same anxiety I get when I realize I’m lost in a city I should know by heart. The music that plays for shadows to dance to around a bonfire.

Buy their new album. Buy all their albums. It’s not October unless you’re listening to O’Death as you walk down a yellow sidewalk in the purple dusk- hand in hand with your own demons.

Devils begin to open their eyes, stretch and smile after hibernation.
Ghosts wander the streets.

I walk down a busy Queens street, but it’s not so busy anymore. It’s black out, the streetlights are dim…but I don’t feel alone.

I read more.
I become possessed by a death god and I consume constantly.

I feel like I’m being watched when I’m outside.
Shadows down side streets. Eyes in trees. 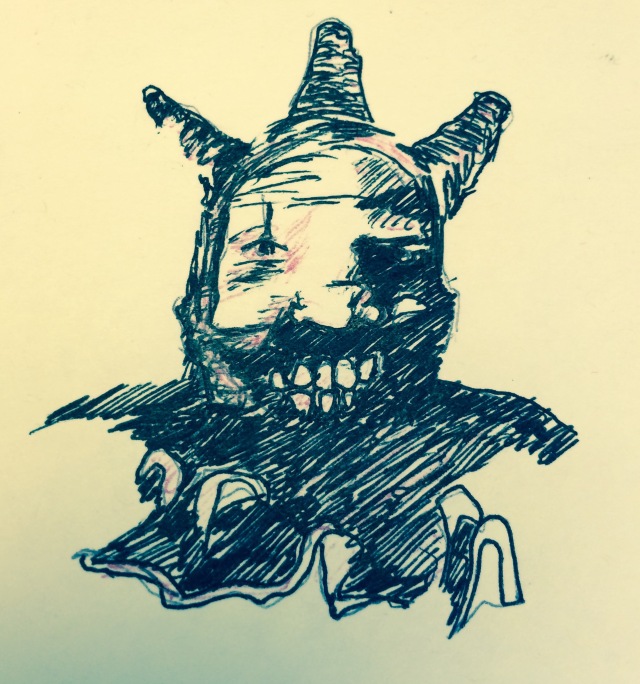 If I Had Control Over Judgement Day

I open my eyes and the sky explodes.

I thought it would be bigger. It was more of a whimper than a bang.
It’s the end of the world and you can hear a whisper.

Everyone was wrong. There was no rapture, no aliens or zombies or world wide war.
It just started as a little spark. Tiny, really. Falling from a singular black cloud over the Pacific ocean.
Like God lit a cigarette and let the match fall.
The ocean caught fire. I think it was fire. It wasn’t hot though.

It spread to land, up mountains and slowly made its way to the sky.

The end of the world. I wasn’t even shocked. I always knew it would happen during my life time.
I mean, I hoped it wouldn’t, don’t get me wrong.

But here we are.

In a way it seems beautiful. Completely hopeless, but beautiful. Like those photographs you see of wars and violent protests.
There were no protests this time. No mass looting like you’d think.
It all went down like a horrible ballet. One spark in the ocean and society jerks and contorts like a Stravinsky firebird.
No pun intended.

If I had control over judgement day, I wouldn’t change anything.
Bright flames and ash falling – it’s peaceful, it’s quiet.
No one is screaming. I don’t hear crying. I don’t even see anyone else.

The end just slowly envelopes everything. Creeping along and leaving the void in it’s trail.

I’m just going to sit back, smoke this last cigarette, drop my match in the sea of flame like a god and wait.

I close my eyes.

I open my eyes and see nothing. Nothing at all.

I’m generally not up to date with new technologies.
Always a smartphone or two behind the masses. Never with the best computer or software.
I just need the things that let me get done what I want to get done.

Social media used to be simple. You friends with people you actually knew on Facebook, Twitter was a stream of conversations and links and Tumblr was photo after photo for your browsing pleasure.

But it all got to be a bit much. The beasts grew up and developed into monsters.
Facebook was hit with privacy backlash and even went so far as cutting the messages from their normal phone app. Twitter and Tumblr are now constantly inundated with ads and promotional posts, mostly by companies that don’t seem to understand social media.

Then I found my way in to Ello. It’s early, still in beta and a bit buggy but it’s getting better each day.
I’m not trying to promote it, it doesn’t need my help.
I just want to say I’m comfortable there. No ads. It’s simple. The users on it are extremely creative. I’ve seen great design and photography and art and poetry.

It’s what all the others used to be. A community that likes each other and appreciates each other.

I’m tired of Facebook telling me to like thousands of pages and people I might know but have never seen.
Ello is different. It’s fresh. I suggest you try it out, just to see.

Lilliput, or, The Incident of Being In An Art Show a Decade After Dropping Out of Art School

I am pleased to announce that I have a small, literally small, piece in an art show in Milan…tonight. Go see it! Quick!

Thank you to Cynthia von Buhler for allowing me to show with some amazingly talented people – artists whom I admire greatly.

I went to the Savannah College of Art and Design…and subsequently dropped out after a year. I just didn’t have the passion for art the way I had growing up. I fell in love with writing. I wrote constantly. Filling up notebook after notebook. I pursued writing to another school and got a degree in English.
And now, here I am, in an art show a decade after turning my back on illustration.
It’s a strange feeling. An old lover coming back into your life after you’ve scorned them. The awkward starts at conversation, the almost unnoticeable moment when you slip back into that groove.
I felt that. I struggled for weeks trying to come up with something. It couldn’t just be anything, you know? When it clicked, it went easy, it flowed and I looked down at this tiny little drawing and I was proud of it. I felt I had made something that should be seen in the world, not just on this blog.
It was a serious piece of art, and I fell in love again.

The show is called “Lilliput” and starts off in Milan and makes its way back to New York later in the year.

Totally honored and blown away.
To see more about the show click here.